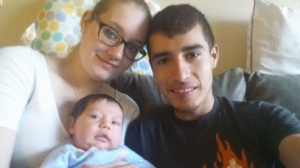 When I was in 6 or 7th grade, I started having episodes of heart palpitations. Doctors said it was panic attacks, and it continued through high school and after graduation. Finally, I connected with Karen from Health Literacy for All and she helped me clearly summarize my symptoms and the history of my condition and helped me seek medical treatment at a different hospital. That day I finally got my answers. I had Supraventricular Tachycardia (SVT)

Karen helped me get health insurance and find a cardiologist. On May 23, 2013 I went to St Peter’s Hospital and had a cardiac ablation. But this wasn’t the end of the problem, because I started having palpitations a couple of months later. Following the strategies I’d learned from Karen, I kept seeking medical advice until I was given a diagnosis of IVTs: racing heart palpitations that were not able to be treated with surgery.

Things got more complicated when, in October 2013, I became pregnant with my now 7 month old daughter. Because of my heart condition, doctors gave me a 10% chance of carrying her through the first trimester, and an even smaller chance of surviving delivery.

But soon our baby started throwing up after almost every meal. At 2 weeks old, an ER doctor told us it sounded like pyloric stenosis, a condition more commonly seen in boys older than our daughter. Without doing a test, they ruled it out because she was too young and a female. Her pediatrician said, “Babies just spit up. Feed her less more frequently and burp her often.” But she had lost 15% of her body weight and weighed less than she had at birth.

The health literacy skills I learned from Karen helped me demand that doctors keep seeking an accurate diagnosis. After more tests, we were told, “Your daughter has pyloric stenosis. It’s so severe that she’s going to need surgery.”

On August 10, 2014 at 1 month old, our daughter had surgery. We were told that if we had waited one more day, our daughter would have died from dehydration and malnutrition.

Because of my experience with having to fight for my own life, I was able to fight for my daughter’s life. You have to be your child’s advocate and I’m so glad that I learned that before it was too late.

My daughter is now a strong, smart, healthy 18 lb. 7.5 month old girl who always has a smile on her face.

A $500 donation allows us to provide the same level of care to another young family. 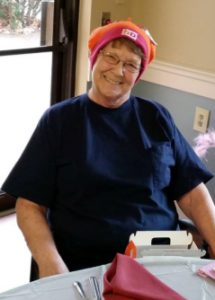 I am a resident at Doubleday Woods. Karen Laing has come to our building and taught classes. She is very interesting and has a diverse background which makes her teaching style understandable to all different people. I personally enjoy hearing her speak because she is upbeat and positive. Her message is clear, concise and positive, while educating seniors on health issues. I have seen first-hand some of our seniors that have a negative outlook on their lives and when Karen gets through her presentation they seem much better and more positive all around. Karen takes her time with seniors, especially on a one on one basis. She stays after her presentations to talk to them and to help with questions, making sure everyone understand her class. If they don’t she will talk to them and has scheduled to return with more information so they are better able to understand their health care needs. I would recommend Karen to any outreach organization trying to improve health care literacy. I feel her sincerity; her drive and her compassion make her the prime choice for educating on this subject.

A $1200 donation allows us to train the staff of this agency or another similar agency.

$3000 allows us to give some training to every resident this agency sees in a year.

List of Places Health Literacy for All Inc. taught classes for free

Those marked with an * asterisk have requested classes again for this year.

Capital District Center for Independence has asked for training for their clients.

Stillwater High School wants 2 classes taught to each of their high school health classes every year.

Schenectady Community Action Program wants a 2 hour staff development class and 2 hours of student classes taught to each of their health training programs.